Guidelines for cavers regarding bat conservation 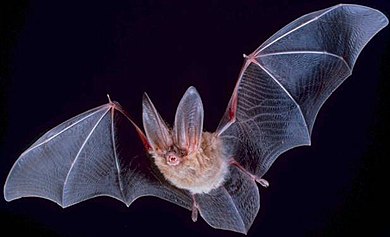 The exploration of caves sheltering bats usually implies some degree of disturbance for the animals.

However, this disturbance can be clearly reduced by responsible practices.

Here are some guidelines on how to act according to the situation:

You are preparing the underground trip[modifier]

Then check the cave file on GrottoCenter[N 1] to see whether the presence of bats is mentioned.

If bats are present in the cave, you should adapt the number of cavers and the chosen period.

In doubt, get in touch with the regional bat correspondent.

You should then choose to abort the exploration and turn to another cave if this happens to be in one of the periods when bats are significantly present.

You are in the midst of an exploration and meet a colony of a large group of bats (a few dozens, up to more than 1,000)[modifier]

You should then turn around whatever the season.

The panic within a colony could take a dramatic turn.

In the summer period, it can lead to the failure of mating, a major problem for animals which bear only one pup a year.

Repeated alerts in winter may eventually cause the animals’ death: their energy reserves may become exhausted with each new alert.

You might return at a later period, the presence of the bats being seasonal.

You are exploring and find some isolated bats[modifier]

You may go on exploring and must comply with the following guidelines:

You are about to blow up obstructions or remove rocks[modifier]

The release of noxious fumes related to the use of explosives, the detonations, and the modification of the physical integrity of a cave can result in the death of the bats or the desertion of the site.

You should make sure there are no bats on the site when explosives are being used.